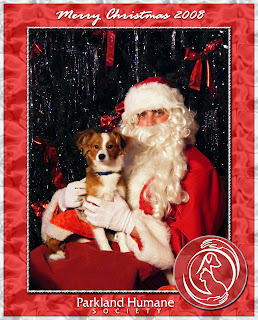 Monday December 8th was the day that we had the Parkland Humane Society - Pets with Santa photo shoot. I took all the pictures and also designed the photo frames. The pictures turned out great and we made some money for the PHS and we plan to do it again next year.
Duane gave me my Christmas present early so that I could have it for the photo shoot. He gave me a SanDisk Extreme III 4GB card for my camera. He thought it might make my camera a little faster but I don't think it did but boy was it fast to upload the pictures to the computer. I had about 300 pictures on the card and they were uploaded in a flash!
Posted by CMcM at 9:26 AM